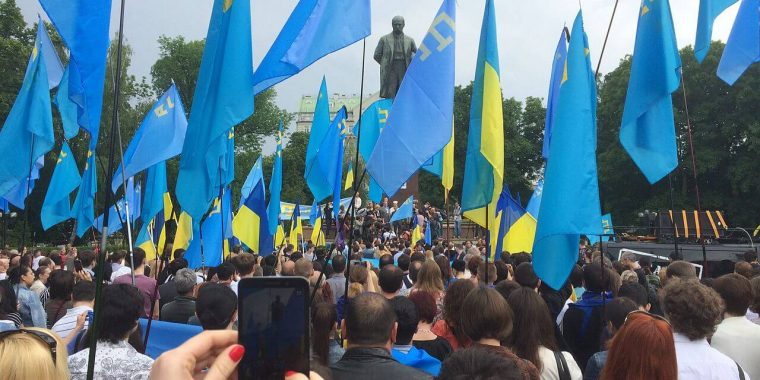 Last year, Russia annexed Crimea from Ukraine, and it made international news. Pro-Ukrainian factions considered Russian actions to be unfair regional despotism, whereas pro-Russian groups considered the annexation to be justified.

Amidst all of this, one particular voice remained unheard, and it is unheard even to this day: the Tatars of Crimea are currently being marginalized and persecuted, and their plight is ignored not just by the international media, but even by Muslim states, with the sole exception of Turkey.

Such silence is deafening, especially considering the fact that the Tatars are a known minority in the region, and are even recognized by Russia as one of the key communities to have been persecuted and oppressed during Stalin’s era. Yet, virtually the whole world remains silent on this issue.

Who Are The Tatars?

Tatars are ethnically Turkic people, indigenous to parts of Asia and Europe, such as Crimea. Historically, they have been part of some of the most important empires and kingdoms, such as the Golden Horde.

Tatars in Crimea are Muslim by religion, and once ruled over the region as a rather powerful and important entity: the Crimean Khanate, which was, for the most part, a key vassal state of the Ottoman Empire from 1478 till 1774 CE.

In 1783, the Khanate of Crimea was annexed by the Russian Empire and renamed as Taurida Governorate. Ever since then, times have been tough for Crimean Tatars.

In the 19th century, thousands of Tatar people left Crimea, fearing annihilation at the hands of the Russians after the Crimean War. In the following century, the Soviet Famine of 1932-33 too was not kind towards the Tatars, and hundreds of them perished during the famine.

During the Second World War, many Tatar soldiers fought for the Soviet Union; yet, shortly after the war, in 1947, Stalin chose to forcibly deport over 191,000 Tatars from Crimea to Uzbekistan. Nearly half of the migrant Tatars could not make it to Uzbekistan, and died on the way owing to disease and starvation.

This forced deportation is the reason why even today hundreds of Tatars live scattered all throughout Central Asia — after the fall of the Soviet Union, many Tatars chose to come back to Crimea, but many others did not. The 2001 Census held the number of Tatars residing in Crimea to be somewhere around 250,000.

The State of Crimean Tatars

Following the Russian annexation of Crimea in 2014, the pogrom against Crimea’s Tatars has been two-fold.

Russian authorities chose to get rid of the Tatar Mejlis, the legislative body working to restore the civic, political and social rights of the Tatar people. Offices were vandalized, and many members of the Mejlis were enlisted as anti-national extremists.

As such, the operations and meetings of the Mejlis are now being conducted via telephony services such as Skype. However, things are still getting worse. Many leaders and members of the Tatar political and legislative body have been arrested or deported.

This, of course, is not fully without a cause. Several Tatar leaders have openly expressed pro-Ukraine sentiments, and some even went ahead and held rallies against the Russian annexation of Crimea. For instance, the Deputy Chairman of the Tatar Mejlis, Akhtem Chiygoz, is in prison owing to such actions.

But political oppression is not the only side of the coin.

This is the more complicated part of the narrative: Russian authorities are indulging in systematic vandalism against Tatar culture and identity.

To begin with, it might only be a matter of time before the name “Crimea” is replaced by “Taurida”, thereby attempting to reject the region’s Tatar and Turkic history.

Furthermore, Tatar children have very little access to their own language, culture and history. There are just 14 Tatar schools in the region, and if a kid does not attend one among these 14 schools, he or she cannot easily learn the Tatar language. To make things worse, lessons in Tatar language, culture or history are provided only on weekends. The problem is obvious — children in Crimea are children after all, and not many of them enjoy going to schools on weekends.

And just in case you’re wondering, masjids in Crimea have not been spared either. Many masjids in the region are now fitted with CCTV cameras to help the spy agencies and Russian authorities.

Personally, I do not expect the Western media to take an unbiased stand anyway. In spite of the fact that many outlets dislike Russia, their dislike for Muslims is probably higher, and as such, their silence is understandable. As a result, while the world is surely talking about Crimea, Russia and Ukraine, the plight of Tatars is rarely mentioned.

However, the silence of the Muslim World is beyond comprehension. Turkey does speak in favor of the Tatars, but more often than not, it has more to do with shared ethnic and linguistic roots, and less to do with Islam in itself.

The rest of the Muslim World, on the other hand, is mute. No words, no protests, not even a slight reference to this issue.

The reasons are fairly simple. The dominant part of Muslim voices in the West and elsewhere, nowadays, consists of certain *sections and sects* that claim to be Muslim, but see no remorse in siding with oppressors against the oppressed.

Russia has been acting as the guardian of the corrupt and inefficient Bashar al-Assad regime in Syria. To protect al-Assad and cover his atrocities, Russia has bombed and killed innumerable civilians. As such, the sects within Islam that side with al-Assad consider it their moral obligation to defend Russia, even if the Russian authorities oppress and prosecute Tatars or any other community for that matter.

Furthermore, members of the Islamic community, even if they do not belong to the same sect as al-Assad, are either too busy with their ethnic differences, or too unaware of their surroundings. As painful as it might seem, the pro-Assad faction is getting the spotlight acting as the voice of Muslims worldwide, and this particular faction is more than happy to see the Tatar people in pain.

One can only hope that this issue will not be ignored for long, and before it’s too late, the Muslim World in particular (and the international community in general) will choose to be more outspoken against Russia’s treatment of the Tatar people.

Liked what you read?

Thanks, you're just one step away from subscribing. Simply check your mail and confirm your email address.